Key Differences Between Spoken and Written Languages and How it Affects Subtitling Jun 02, 2022
The Ultimate Guide to Games Translation May 13, 2020
Languages in India - How Many are There? May 18, 2020
Weighted Word Count Feb 20, 2020
The Netflix Effect: A New Era of Subtitling Apr 07, 2021
Categories | Subscribe | Populars
Written by Steven Bussey
on February 25, 2020

It’s a jungle out there.

The translation/localization market is huge and getting bigger each year. There’s a lot of money to be made, and that attracts not only professional providers, but also unscrupulous players who are either outright cheating or just economical with the truth. Buyers get quotes ranging from suspiciously rock-bottom to unjustifiably sky-high and don’t know what to think. How can the price for the same task differ so much? Or is someone taking them for a ride?

Before you understand how much translation costs, you have to ask yourself a more basic question: what is translation? Everybody thinks they know the answer to this one, but think about it for a minute:

For better and for worse, there is no one standard definition and it’s the nature of any creative work that there’ll always be arguments about what’s good enough and what isn’t. The good news is that there are best practices out there, widely followed throughout the industry with the exception of some fly-by-night operators, whom I’ll get to later on.

If you want something translated, you can do it in a few different ways starting with the simplest (and free!) to the most sophisticated:

(Andovar fits into the one before last, in case you’re wondering.)

How much does translation really cost?

It’s a free market, so people can ask for what they please, depending on how they value their work, what their costs of living are, whether they’re just starting and want to get work experience or they are seasoned professionals busy with long-term clients. But there are established averages when it comes to professional translation and one way of finding them is through Proz.com. It is a huge online marketplace where translators advertise their services and buyers post jobs. Based on what rates thousands of translators have entered in their profiles, Proz publishes a table with averages. You can see the most popular languages below and the full and most recent table here. 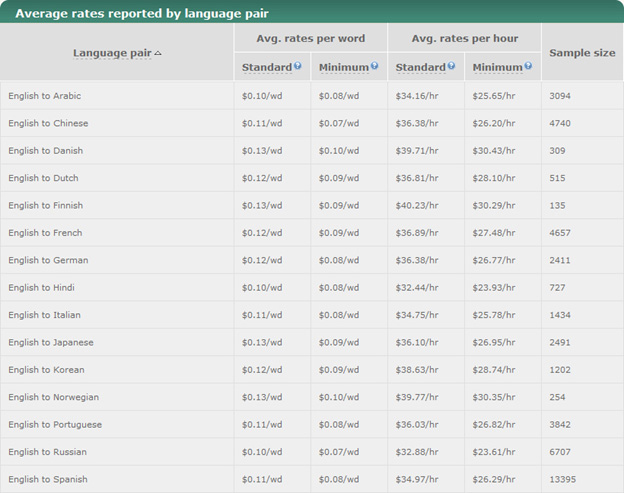 Remember that these are rates charged by individual translators, and that:

Keeping in mind the above, the rates charged by individual translators are the foundation on which agencies calculate their pricing to end clients.

Not all agencies are alike

Some buyers of translation choose to work with freelancers directly. It’s obviously less expensive, and can be a good idea for simple jobs in one or two languages. When projects get bigger, new languages are added and file formats are not straightforward you may need an agency to help handle all the extra work. Secondly, working with different freelancers and/or online marketplaces all the time means there will be no consistency between projects. Agencies typically maintain reference materials like translation memories, termbases and style guides, which help maintain consistency over time.

To be competitive, agencies look for ways to lower their costs and offer cheaper rates to clients. Some ideas are sound, others unscrupulous or even illegal. Let’s look at a few:

What’s included? While most agencies know that it’s risky to offer translation without any editing, proofreading or quality control, they might still do it in order to make their rates as low as possible. When comparing rates between agencies, make sure to find out what they include in the per-word rate. Is it translation-only? Translation with editing? With proofreading? What QA steps are followed? Do they charge for localization engineering, file handing, termbases, style sheets, etc. separately?

Geo-leveraging It’s not a secret that costs of living and running a business are lower in some countries. The world has been becoming flat for quite some time and outsourcing or moving offices to less expensive regions doesn’t create as much controversy as it did in the past. Translation companies do that too. While translators themselves usually live and work in their native countries (see next point), agencies offer localization engineering, desktop publishing, audio recording and project management which can be done cheaper elsewhere. This is one of the reasons Andovar has offices in Thailand, India and Colombia. If you want to know where your work will actually be done, ask your vendor.

Native speakers Native speakers of - let’s say - Norwegian usually live in Norway where costs of living are high. This makes it one of the more expensive languages to translate (as you can see in the table higher up). But what if we look for speakers of Norwegian in another country? Maybe one with low costs of living, like India or Russia? Bingo – they will definitely agree to charge lower rates than their friends in snowy Norway! But is Norwegian their mother tongue? And if they are native speakers who happen to live abroad, is their knowledge of the language on par with their compatriots in Norway? It can be, if they made an effort to stay in touch with their native cultures and how the language is used.

(Un)qualified translators In addition to being a native speaker, what makes someone qualified to translate? There is actually no easy answer to this and while some countries have official certification, translator associations and exams, others don’t and there is no established international standard. What it means is that an agency can call whomever they want a “qualified translator”, including people who are students, inexperienced and not native speakers. While the results may be acceptable for simple content, there should be transparency about who will do the work.

Outsourcing Many of the world’s biggest MLVs don’t actually work as simple agents between clients and translators, but add more layers of outsourcing. When the language pair or subject matter is not their forte, they hire smaller vendors to do the work. However, with every additional level the risk of miscommunication, delay and end price all increase.

Reputation What to do if an agency insists they only use native-speaking and highly-qualified professionals, but you still have doubts? Proz, the website mentioned earlier, also maintains a database of translation providers along with scores translators give them. It’s worth looking up the company you’re talking to and see how they fare. If they are not on the list or have almost no scores – they likely don’t work with professional translators or have only recently opened. If the scores are low, it means they don’t treat their translators well. Another website worth checking is GlassDoor, which stores comments from company employees and ex-employees.

What’s a PM Fee? Most agencies will charge something called the Project Management or PM Fee. It typically ranges from 1 to 10% of the total and covers the work of the project manager handling your work. Taking the PM Fee out of the per-word rate will make it go down, but PM Fee will still be added later on. Some agencies will also have Set-up, Kick-off and other types of fees. When comparing quotes from agencies, make sure to check how many percent they charge and include that in your comparison.

Audio quality Many agencies, and Andovar is one of them, also offer audio services in different languages. Some have their own recording studios built to industry standard and produce broadcast quality audio, while others ask speakers of the language to record the scripts at home using their own computers or even mobile phones. Want to guess which one costs more? And which one is of higher quality?

Bait and switch Some agencies present great-looking CVs of translators they work with and offer their work at rock-bottom rates. How is that possible? It’s not the same people doing the work! The CVs may be real, but the translation is done by their less-qualified colleagues. The extreme version of this is the following:

Do you know what the latest translation agency scam is? It goes like this:

Focusing on what doesn’t matter Some providers will go at great lengths to make a good impression:

I hope this article explained some of the tactics translation agencies employ. Business is business and as long as it’s not illegal, a company can do whatever it wants. However, as a buyer of translation you should know who you’re dealing with before hiring an agency to work for you!

Feel free to get in touch with us here at Andovar if you have any further questions or if you might be interested in working with us for your next localization project.

Five Ways to Make Your Localization Vendor Love You

By now you've heard us talk extensively about finding the right localization partner. Being able to find that one specia...

Machine Translation: Breaking Down the Hype and Fears

Machine Translation and the use of Machine Learning, Artificial Intelligence and Language Processing technologies has go...

The need for translation and localization services is constantly growing, but with that naturally comes an increase in a...