Languages in India - How Many are There?

There’s been a lot of buzz about Indian languages and their localization lately. Pretty much everybody knows that India is an up-and-coming country with a huge economy and over a billion people. GALA started to organize annual think! India events and an Indian media organization MediaNama, which writes about digital and telecom businesses in the country held its first event on Indic languages and their digital future in 2014. We strongly believe that India is an emerging power and localization needs will rise every year. Andovar opened a local office in Kolkata at the beginning of 2014 and another in Mumbai in 2020. So let’s look briefly at what we have learned about the languages in this fascinating country.

What is the national language of India? If you answered Hindi, think again! India has no national language and indeed, no one official languages either. After gaining independence from the British in 1947, the leaders of the new country took the issue of a national language seriously. On one hand, one language would help unite the vast population, but on the other, they realized that it would be difficult for everyone to accept only one language at the expense of their regional ones. The first candidate was Hindustani, a language comprising what is now known as Hindi and Urdu. It had the support of Mahatma Gandhi, but after the break-up into India and Pakistan, the case for Urdu became weaker, since most of the Arabic-writing population left. Finally, Hindi was chosen as the language with the highest number of speakers and in 1950, the Constitution of India specified that the official language would be Hindi in Devanagari script and that English would be phased out by 1965.

Despite planning, this decision led to violent protests by groups who felt that Hindi was imposed on them, especially in the states in the South, where most people spoke languages of the Dravidian family, very different from Hindi. As a result, parliament enacted the Official Languages Act in 1963, which provided for the continued use of Hindi for official purposes along with English even after 1965. The Act was amended in 1967 to stipulate that the use of English would not end until a resolution to that effect was passed by the legislature of every state that had not adopted Hindi as its official language as well as by each house of the Indian parliament.

Nowadays, the basis for official status of languages in India remains in the constitution along with various amendments, especially the so-called Eighth Schedule. It includes 22 languages, and each Indian state and union territory can decide which one it wants to adapt.

The map below shows the main official languages of each Indian state and territory. 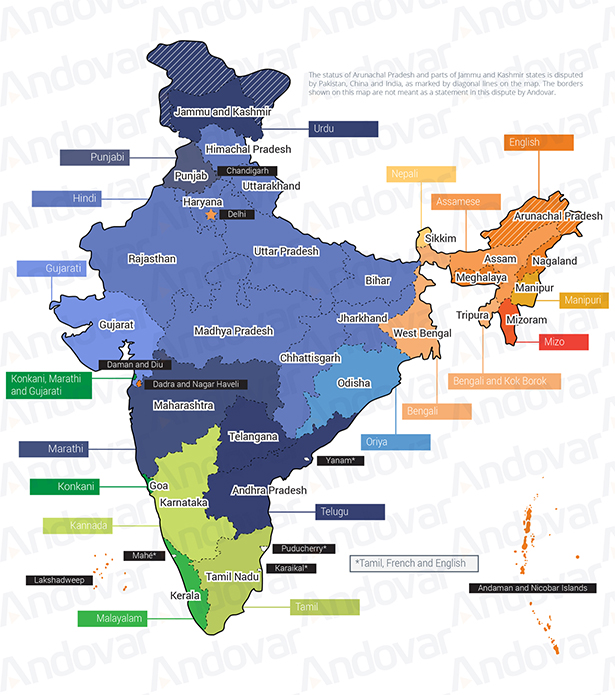 That was quick a brief introduction to a complex and fascinating topic. If you would like to learn more about languages used in India, you can download our 70-page white paper Languages of India for free.

What Do We Mean by Localization?

What languages should you choose?

Today’s businesses are looking to localize their brand, product and service content in regional languages. This can impr...

Help Consumers During Coronavirus By Localizing Your Websites

The global onset of the coronavirus and the start of the quarantine in early 2020 naturally led to a staggering surge in...