Pokémon GO took the world by storm. Over 100 million players in dozens of countries were running around throwing PokeBalls at cute Japanese critters. It was released in Thailand in the summer of 2016 and quickly captured the hearts of local players.

So what game localization lessons can we learn from its story?

A Little Bit of History

Inspired by a love of bug-catching and Game Boy, Satoshi Tajiri created the Pokémon franchise in the 1990s. He named the main character in the game “Satoshi” after himself (Ash Ketchum in English). He originally used the name Poketto Monsutā (Pocket Monsters), and later shortened it to the now-famous portmanteau - Pokémon. The word is an example of wasei-eigo, literally “made-in-Japan English.” Other such words are “sarariman” (salary man).

The names of Pokémon are also linguistically interesting as they reflect some defining characteristic of that specific Pokémon. For example, a water-bound turtle Pokémon is named Squirtle (from “squirt” and “turtle”) while a rock-looking one is Geodude. This is an even more interesting challenge in other languages. For example, Geodude became Kleinstein (“little stone”) in Germany, and Squirtle is known as Carapuce (“flea in a carapace”) in France. There are exemptions however; Pikachu remains Pikachu or something very similar in all languages.

As could be expected, fans around the world have become quite attached to the way the monster’s names have been translated. For example, in Hong Kong there were protests at the Japanese Consulate after Nintendo announced a change in the spelling of Pikachu’s name.

With those linguistic side notes out of the way, let’s move on to Pokémon Go.

It was first released on July 2016 in the USA, Australia and New Zealand by Niantic, Inc. and became the fastest-growing mobile game in history after topping the US Apple Store’s free and top-grossing download charts within 24 hours.

The game was not launched in all countries at the same time, likely due to challenges around handling the huge load on servers. To date, Pokémon Go is available in 37 countries (not in China for example, but there’s a locally-made clone was built already), with different locations of PokeStops and Gyms in each country. However, customizing the maps and choosing the locations wasn’t as time-consuming as it may seem, since most are based on popular landmarks from Google Maps and spots suggested by the players of Niantic’s earlier game Ingress.

The craze finally hit Thailand on August 6th and the game became one of the top apps on the market even though it has not been translated into Thai. While many location names appear in Thai, others are left in English, and it seems that machine translation was used in some cases. 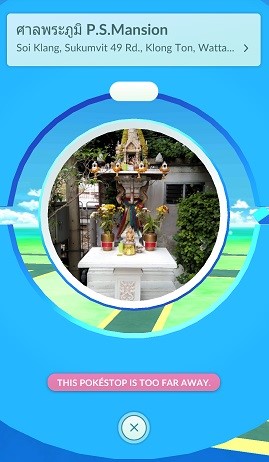 PokeStop in Bangkok showing a mix of Thai and English

While Thai is not among the top languages to localize your game, Thailand is well-known for its low level of English skills and we would normally discourage trying to launch a game without Thai localization. Let’s look at what happened in Pokémon GO’s case.

The game has seen immense success worldwide although it is playable only in English, French, German, Italian, Japanese, and Spanish. Players in countries where these languages are not spoken have to do the same as Thais – play it in English instead.

According to Andovar’s Online Quote Generator it would only cost $381.15 to translate the iTunes App Store description into all Tier 1 languages (Simplified Chinese, French, German, Japanese, Portuguese, Russian and Spanish). That doesn’t include the User Interface, but even then it would be a paltry sum for a game that’s raking in millions. 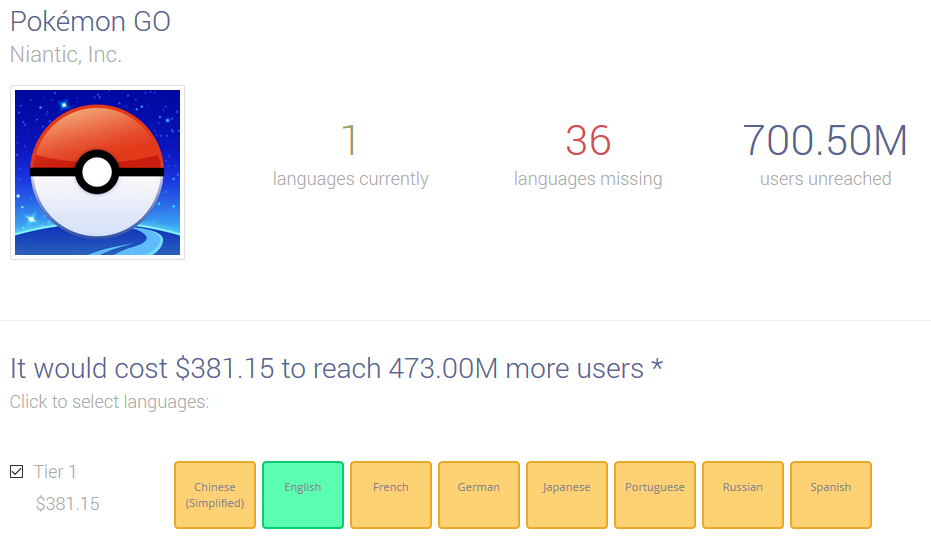 The game’s developer must have their reasons for not localizing, but what’s even more interesting is that Thais don’t seem to mind that the game is in English.

The main reason why people can enjoy the game just fine despite lack of localization is that it’s so simple and there’s so little reading involved that language ability is hardly important. This is in line with our general recommendation that simple, casual games might not need localization at all. 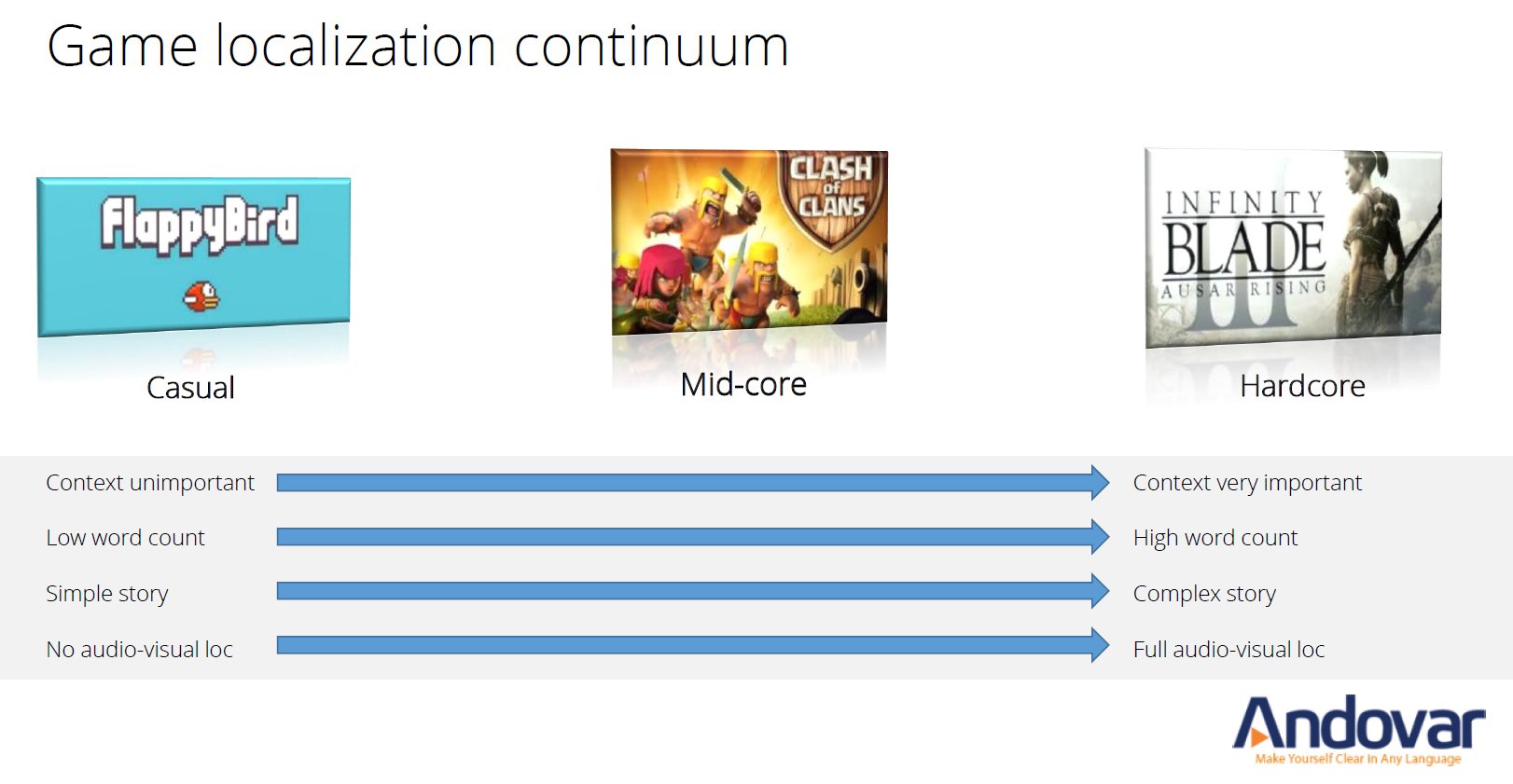 One of Thailand’s largest media companies, True Corp won the rights in 2014 to exclusively sell Pokémon items and develop a localized version of Pokémon video games. True is reportedly in talks with Niantic and the Pokémon Company on the details of the localized license and expects to launch a localized version in Thailand by next quarter. Even the Thai Tourism Ministry decided to get involved and will ask True to add PokeStops and Gyms to various popular and safe tourist destinations to attract travelers there.

Whether the Thai-language version will see success remains to be seen, but it is certain that this delay is worth a fortune in lost revenue.

Lesson 2 - But Usually You Do

This doesn’t mean that nobody should localize their games anymore. Actually, Pokémon GO is exceptional in this regard. We think that the following factors played a role:

This means that most games shouldn’t hope for such success unless they manage to inspire a similar media frenzy and are based on a famous IP. Without localization and in-country promotion, they would languish far down the list of apps and would hardly be played by anyone.

Lesson 3 - Do Your Homework Before Entering a Country

Within less than a week of the game’s launch, authorities from the highest levels of Thai government have gone on record to mark the game as a nuisance, danger to children and adults alike and even called for an outright ban. That reaction was not unique to Thailand, and occurred in several other countries prior. What caused such uproar?

Players need to physically approach specific locations in the real world to make progress, and those locations were preloaded by the developer without regard for safety and privacy. Thailand’s national telecom regulator even sent a letter to Pokémon Go’s developer, asking to set "no-go zones" for players in Thailand. The four restricted areas encompass:

The company has been slow to respond to such requests, likely overwhelmed by the game’s popularity and bombarded with demands for new features, adding and removing locations, and speeding up the release in new territories. In the scramble, localization is probably not on top of the agenda and the game’s incredible success means that the financial rationale isn’t there.

However, for the vast majority of the hundreds of thousand games on iTunes App Store and Google Play the reality is completely different.

Southeast Asia is an area of approximately 4.5 million square kilometres, roughly half the size of the United States. Co...

Tips for Localizing a Travel App

It's hard to believe that it's been barely over a decade since Steve Jobs first walked across a stage in California and ...

Mobile App Localization: What it is and How to Do it Right

Imagine that you’ve been swept up and deposited smack bang in the middle of a foreign country, with no knowledge of the ...