First things first — 2021 was a tremendous year for the gaming industry, and that's saying a lot. In 2021, the gaming market was 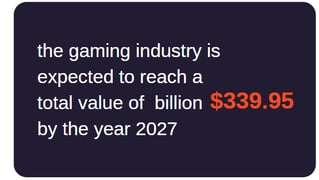 valued at an astronomical $198.40 billion, but most experts suggest there is massive room for growth. According to Mordor Intelligence, the value of the gaming industry is expected to reach a total value of $339.95 billion by the year 2027.

To put it into perspective, this represents a compound annual growth rate of 8.94% from 2022 to 2027. With such tremendous projected growth on the horizon, it's imperative for developers and publishers to understand and capitalize on the games trends shaping the landscape. Let's take a closer look at some of the top games trends either occurring now or are on the horizon in 2022. 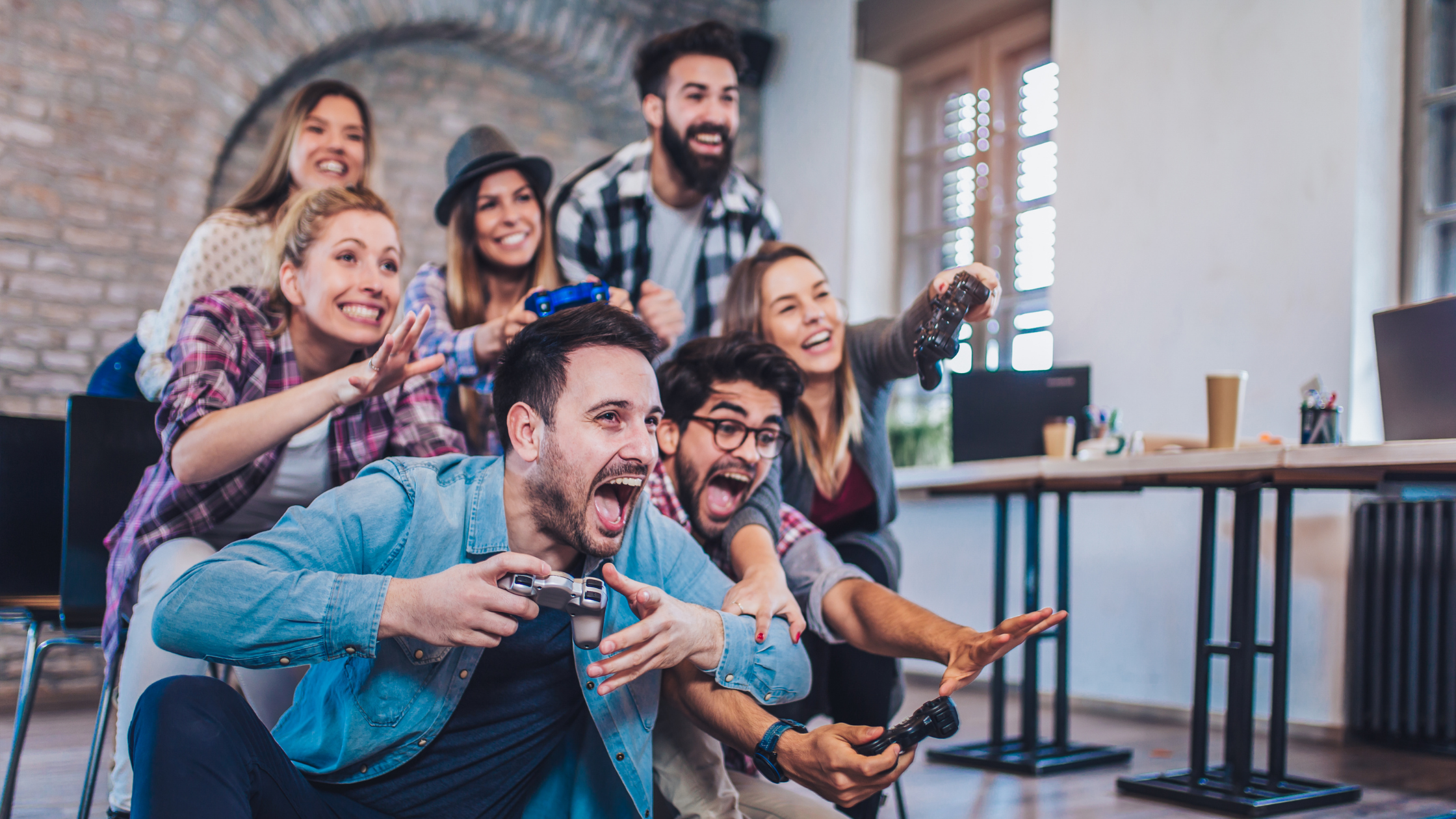 It's Cloudy with a Great Chance of Success

2022 is touted as the make-or-break year for cloud gaming. While it always shown significant promise —as most cloud solutions do—, the stumbling of Google's Stadia in 2021 left many developers scratching their heads in dismay. As such, cloud gaming platforms must be made more enticing, or the notion should be ditched altogether until improvements occur within the technology.

When cloud gaming wins, everyone enjoys the spoils. On one hand, gamers will enjoy the on-demand, I-want-it-now access they desire, while publishers enjoy an easier way to monetize older games, including games from previous platforms. As the trend cloud games trends are set to clear up more in 2022, it poses the question "Who will win the game of subscription gaming?"

Who Will Win the Game of Subscription Gaming

Since 2017, Microsoft has been a desirable outsider in the world of subscription gaming with its Xbox Game Pass subscription. However, most experts suggest this will not be the case in 2022. Nintendo has already begun beefing up its Switch Online subscription service with additional perks and add-ons. In either case, subscription gaming is proving to be a powerful delivery method for new services and games alike. Here are a few subscription games trends to watch out for in 2022:

The Rise of Artificial and Virtual Reality

By now, you've most certainly heard of the "metaverse" — hailed as the next-gen of the internet (not necessarily Web 3.0) that Meta has banked its future on. Although the metaverse as envisioned by Mark Zuckerberg and Tim Sweeny may be a few years away, the seeds have been planted, and we can expect to see new companies beginning to sprout in 2022. However, there has been little conversation around where the key technologies of metaverse — augmented reality and virtual reality — may be moving in the near future.

This should drive more conversation around where VR and AR are headed and the types of experiences users can expect in the interim — prior to the metaverse reaching a level of maturity. Today, both technologies are major games trends that may greater application in workplace and social contexts. Here are a few key VR games trends to watch in 2022:

All things considered, 2022 is setting up to be a monumental year for VR and AR. It's poised to be the year when a few VR and AR products are launched or revealed — at least.

Improved Viability on the Play-to-Earn Model

There's nothing new about earning money to play video games. Historically, however, the monetization attempts by players have found themselves at odds with the terms of publishing companies. Simply put, companies were not willing to regulate and moderate play-to-player trading, which included in terms of development and finances.

Fortunately, things are looking up. Among games trends is the buildup surrounding NFTs and major wins, such as Axie Infinity. This means several AAA publishers, as well as shareholders, are now working to legitimize player-to-player trading. So far, the results have been mixed, and NFTs still face a tough road ahead:

In the face of player discontent, the show must go on, and crypto is chomping at the bit. At the same time, several gamers are silently unbothered by NFT, while skin trading on Steam's CS:GO marketplace continues to thrive.

81% of Gamers Want to Trade Skins for Real-World Loot

Most importantly, a Custom Consumer Research games trends report suggests 81% of gamers aware of in-game cosmetics desire to trade skins for real-world loot. Although it's not a requirement, publishers may utilize blockchain technology to facilitate legitimized and more secure player-to-player trading within the gaming environment.

Even so, game publishers are dealing with conflicting views: AAA gamers reacting negatively to NFT strategies, while investors and shareholders are pushing the box to see NFT strategies. As a result, 2022 may be the year we see publishers checking this box to please both parties by utilizing a less controversial moniker.

Google and Apple App Store Open Up (a Little More)

In the previous year, changes in Apple's App Tracking Transparency (ATT) privacy policy shifted the landscape of mobile gaming. Moving forward, you can expect privacy changes on mobile to have a rippling effect with both Apple and Google having to react and adapt to the landscape.

Among the games trends for 2022, it's projected that Apple and Google will open up their ecosystems to a greater extent. Much of these changes will be associated with the previous year's Apple vs Epic lawsuit — in which the judge enforced more stringent rules regarding anti-steering policies. Traditionally, App store anti-steering policies have prevented publishers from advertising alternate payment systems outside of the ecosystem of the platform holder. Even so, Apple claimed it was entitled to collect payments via third-party payments outside of the App Store.

At the same time, Japan has enforced anti-steering restrictions. To make sure rules are adhered to, Apple will now allow publishers to reach out to users through email if the user accepts this permission. In addition to pressure from regulators, Google and Apple are receiving more pressure gamers. Together, these changes and external factors will prompt Apple and Google to open their platforms — to some extent — to meet the demand for:

However, it's not in the best interest of Google or Apple to allow cloud gaming services in their stores. Because in-app purchases represent the vast majority of app store revenues for both Google and Apple, allowing cloud game services in their stores could diminish game revenues. On the other hand, publishers and developers are looking to maximize their revenues and profits, which can prompt them to circumvent app store payments. As one of the top games trends, we expect the pressure from these companies, consumers, and regulators to continue. In turn, Google and Apple's hands are likely to be forced, which could prompt them to open their platform in 2022 and beyond.

The Continued Expansion of Gamer's Choice

As we previously mentioned, 2022 is on track to be the most lucrative year yet. And this isn't just in terms of spending, but also in terms of content across all devices; PC, console, and mobile. Delays associated with COVID have driven gamers indoors in droves, which has led to one of the most exciting and crowded gaming trends release calenders. The result is more fun for gamers of all types.

The increased Xbox Series X and PlayStation 5 inventory is poised to introduce gamers to an entirely new generation of high-fidelity content. And the release of the Steam Deck will open the flood gates of portability to PC gamers as well as popular PC games to those who prefer handheld consoles. Simultaneously, live operations will continue to modernize and innovate across mobile and free-to-play spaces. This is poised to keep gamers spending money and engaged in their favorite pastime. Simply put, 2022 is a highly lucrative time for developers to tap into the international gaming community via localization.

Game Intellectual Property Value Increases as Transmedia Is on the Rise

Previously, Hollywood labored to successfully adapt gaming intellectual property (IP) into alternate media. It was merely a decade ago video game adaptations were all but certain to fail commercially and critically. This isn't the case today.

We've recently witnessed a monumental onslaught of commercially-successful, premium-quality video adaptations. These TV shows, movies, and cross-game promotions have seemingly done the impossible by capturing captures, stories, and themes. Here are a few of the top adaptation examples:

In addition, the League of Legends' Jinx made its way to PUBG Mobile and Fortnite, which helped increase the popularity and awareness of Netflix's Arcane to gamers. And Horizon's Aloy masterfully forayed to Fortnite, Genshin Impact, and Fall Guys to showcase a single-player game IP to fans of multiplayer line-service games.

One recent event worth mentioning is the Embracer Group gobbling up the IP-rich catalog of Dark Horse Comics. This seismic acquisition highlights the value of solid IP across various media. Dark Horse Comic's three business groups focus on:

However, Embracer's interest can be directly traced to the more than 300 IPs owned by Dark Horse as well as the wealth of untapped crossover potential for transitioning their IP portfolio into gaming solutions. With Embracer Group setting the stage, you can expect to see more publishers placing interest on creating new game-related IP and crossing game IP into various types of media.

While games trends are unique, they all share one thing in common: they occur in a robust global market. And to truly cash in on the projected growth, developers and publishers must be able to launch games internationally. However, this is often easier said than done. Considering language and cultural barriers, it can seem almost impossible to do it in-house. And this is where Andovar can help.

At Andovar, we are a media-focused, niche localization agency that boasts a global presence. We specialize in helping game developers deliver media-rich global content to users, fans, clients, and employees across the globe. As a global firm, we are headquartered out of Singapore and have production as well as sales offices across Thailand, Colombia, India, China, US, and Hungary. With more than 100 full-time employees and over 3,000 globally-located translators, we will handle every aspect of the process, such as localizing the storyline, technical elements, marketing localization, and more.

If you're ready to cash in on the 2022 games trends, Andovar can help.

For more tips and content for global growth, please visit our blog.

Part 1: Pre-production Complete all pre-production tasks Before you launch your game localization project, be sure that ...

Game Translation and Localization for the Chinese Market

Introduction The Chinese game market is large and lucrative for those with the right product, an excellent understanding...