Gaming Trends for 2021 and Beyond, Plus How to Localize Your Games to Increase Revenue

Gamers have reconnected to their favorite digital habit in the wake of the pandemic. Even after COVID-19 is a distant memory, we expect the game market to continue generating upwards of $40 billion in the United States alone.

Plus, if there was any doubt that gaming isn’t just for boys, that’s truer than ever. About 46% of gamers are women. The latest incarnations of Animal Crossing have gained fans among women and young girls, for example. We are also starting to see a shift in the number of women who work in the gaming industry. Women in gaming increased by 3% to 24% in the latest data available from Statista. This diversity is slowly starting to appear in character choices, but there’s plenty of room for growth.

We group these two trends together because they are intertwined. Sports fans love to keep up with the stats on players and check in on scores from simultaneously broadcasting events. They do this on their mobile phones and tablets. It's no wonder, therefore, that mobile esports games are among the trends that will continue in 2021 and beyond.

Game remakes, player involvement and game boosting all respond to direct demands from the gaming community.

Cloud Gaming has used the power of the cloud to revolutionize how users access games. Instead of installing downloaded games, they stream them on their devices. 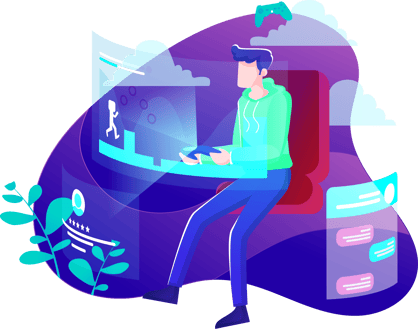 It also provides access to gaming without a high-end computer. Live games run on powerful servers, eliminating the need for computers with all the bells and whistles previously needed for strong performance and graphic capability. Cloud gaming typically works on a subscription model, which smoothes out revenue flow for developers and provides gamers with new games on a regular basis.

Augmented Reality or AR projects virtual objects onto scenes from the real world. It uses tablets, smartphones and AR glasses to achieve this. Pokemon Go was one of the first games to use AR on smartphones. Virtual reality games use headsets to project artificial elements on the screen as if they were part of an altered reality. This is now a multibillion-dollar industry, with virtual reality games becoming popular on platforms such as Oculus headsets and PlayStation VR. We will see much more on this trend as the technology continues to improve.

Face and Voice Recognition has been associated with application server security and video surveillance. However, it’s also made inroads in video games such as NBA-2K15. The game allowed players to scan and superimpose their faces on avatars that played alongside NBA stars. Many systems use voice recognition to engage with the UI. It will be intriguing to see how these features are more fully develop in the coming years.

Gamers always used video gaming to meet and interact with people from across the globe. During the pandemic, they gave gamers the opportunity to interact socially even if they were isolated at home. With many jobs expected to remain remote and more parents deciding to home school children to avoid COVID-19, this trend is likely to continue for the next several years. Having users socially invested in a video game is great news for game developers, who can continue to add new features to existing games or advertise new games to established, tight-knit communities.

Now that 5G technology powers a high percentage of active smartphones, mobile gaming and other trends will have an opportunity to continue blasting off. Smart game developers have already capitalized on the socialization prospects of future gaming. In order to help users connect with esports and other games, it's important to make them available in local languages.

You can count on Andovar to deliver the innovations you need for localized gaming. First, we become familiar with your game. Then, we select voice actors to bring your characters to life with superb performances. Andovar localization experts test the finished result on mobile, PC and other gaming platforms to verify performance and impact.

Contact the team at Andovar today for more information on our video game localization services, including voiceover and dubbing services.

The language translation industry is constantly evolving as technology advances and new platforms emerge. In this articl...

Over the past 15 months, the pandemic has forced professionals in all industries to rethink how they operate. Fortunate...